On Tuesday of Holy Week the chapel of St Thomas More at Jay’s Green in Harleston hosted, as usual, the Essex Leg of the Student Cross Pilgrimage, walking from Colchester to Walsingham. 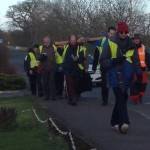 The pilgrims arrive at Jay’s Green in the cold twilight 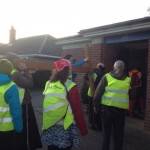 Carrying the cross into the building 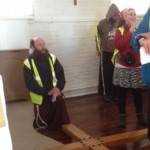 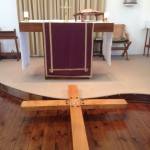 The cross in the chapel of St Thomas More 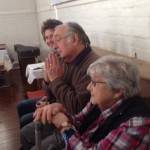 Harleston parishioners prepare to share in the early Mass 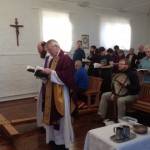 
The pilgrims braved gale-force winds against them all the way, and were tired and windswept when they arrived in Harleston at around 6.30pm, having walked 19 miles, carrying the cross, from Framlingham. Parishioners took them home, gave them a hot bath or shower and and good meal before bringing them back for a short penitential service.

Next morning parishioners from Harleston cooked them breakfast, and many attended the 7.45am Mass before the pilgrims set off once again into a chilly early morning.