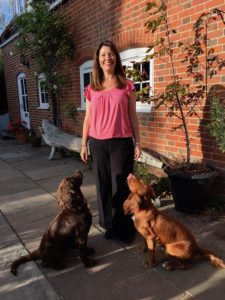 I was born in South Africa in 1975 to immigrant parents, who had moved there with their parents in a hurry in the late 1960s when Mauritius was about to gain its independence. My parents are French speaking so moving to a country which was bilingual (English and Afrikaans), and where their qualifications were not recognised, made for a difficult start. 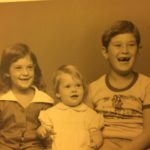 I was the last of three children – my brother and sister are six and five years older than me respectively – and I grew up in Johannesburg where my parents had moved. I had a very happy childhood with a large extended family as part of a Mauritian community.

My family (and community) were very Catholic. I seemed to be at least a distant relation of most of the Mauritian community which made up a big portion of my friends.

We were part of an active parish in Craighall and all the children attended catechism classes on Saturday mornings. I felt part of a group, a club almost, of friends. Catholicism was a normal part of life. 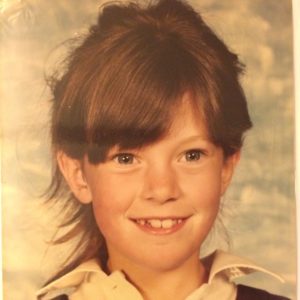 I was desperately shy, having grown up sheltered by the wide group of friends and family I was surrounded by. So, after high school, I studied computer programming, which allowed me to hide behind a computer screen, and soon started working for a small software house before transferring to Standard Bank in Joburg city centre. Apartheid had recently ended so it was an interesting time to be working in the city. 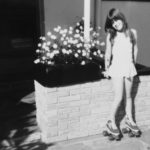 After my Confirmation, I had joined the church’s young adults group, which was very social. Through this I met a friend, Mary-Anne, and we both decided to go travelling abroad. We hatched a plan to start in London and work there, saving up to travel round Europe.

Mary-Anne suggested we stay with one of her relatives near London, while we started job-hunting. I was clueless and happily followed her lead. She went first and then I joined her in London to stay with her cousin who was happy to have us to stay for a little while.

He came to meet me at Heathrow airport when I landed. His name was James Montagu and it didn’t take me very long to fall madly in love with him.

My plans to travel with Mary-Anne never really came to fruition. Instead, three years later we were married. I was 24 and James was 37. 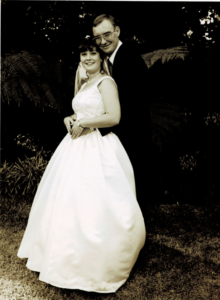 We were married in February 2000 in Johannesburg, and James and I were delighted to be surrounded by our family and friends from both South Africa and Britain. It was a lovely wedding on a beautiful sunny day, and we were married by the priest who had confirmed me. I count myself very fortunate that God had laid out this path for me.

Then we hit a problem. I needed a spousal visa to get back into the UK, and this can be obtained only outside the country. I had the church marriage certificate but not a civil one. The second day after our wedding, James and I stood in a queue outside the British Embassy in Pretoria with a great deal of cash in my pocket, along with many others. We felt completely vulnerable with high crime rates and no option other than standing in line.

With the visa application submitted, we went on our local honeymoon, but the visa did not come through in the time we were advised. Several weeks later, James eventually went back to England, and I moved back in with my parents. Not the start of married life I was expecting!

We didn’t know how long the visa would take and I contemplated getting a job in Joburg. In the end James wrote to his local MP, and amazingly the papers came through almost immediately! So, three months later I was back in the UK.

At that time, we lived in Horsham, West Sussex and I worked at Gatwick Airport as a developer in BAA’s IT department. We wanted to move out of James’s bachelor house , but just couldn’t find a house we liked and could afford.

Out of the blue, both James and I started to think of coming to Suffolk where James grew up and his family were settled. It sounded far-fetched. We put a plan into action and came up for a weekend. I had an interview with Virgin Money in Norwich on the Friday afternoon, and we looked at houses – several lovely ones that we could afford! 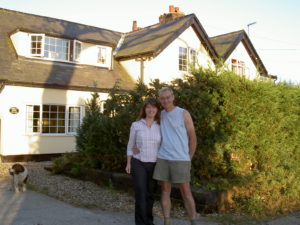 On the Monday, I was offered the job and we put in an offer on Cowslip Cottage in Homersfield, which was accepted. I couldn’t believe how things had fallen in place so easily compared to the struggles we had had finding our way in West Sussex. Again, I felt the hand of God guiding me and clearing a path for us.

In those days, I had a ten-year plan, and this included having a baby. But it didn’t happen – I didn’t become pregnant. This was a huge shock to me – not something I had considered, taking into account my mother had been one of six children and my father one of 13. I found it very challenging to my faith. However, I was fortunate because a priest in confession really helped me to come to terms with this.

When we moved to Homersfield, Father Edward paid an impromptu visit, and welcomed us to the parish. He asked me to become a Eucharistic Minister, which I was very humbled by. I attended a training session with Bishop Michael which helped me feel more at ease. I am very fortunate and honoured to serve the parish in this way.

In 2005 we moved to St Peter’s (South Elmham) and renovated the house where we now live. James took time out from his landscape gardening business to work on the house and I project managed. During this time, we camped in a mobile home in the garden which was a terrific experience. 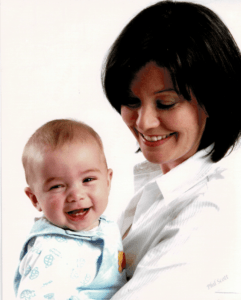 Six years after trying for a baby, I found myself pregnant. James and I were overjoyed! It was miraculous!! And Henry was born in 2008. We were such proud and delighted parents. On Henry’s due date I went to Mass and was asked to be Eucharistic Minister. Since then he and we have been so blessed. I do feel the hand of God helping me through all my life. 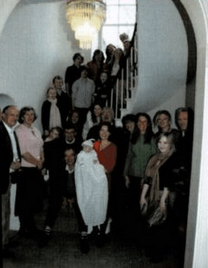 Henry has been brought up in and by the St Eds parish, where he is recognised and actively involved, which is wonderful since having very little of my family here. He is an altar server, and occasionally reads at Family Mass, and he has just left St Edmund’s School.

I had the opportunity to join the HCPT group through the parish on a pilgrimage to Lourdes as a carer. Henry was still a toddler and I missed him more than I thought possible. However, it was an amazing experience and taught me so much about the incredible ability of some we might consider disabled. A true eye-opener for me and a lesson in humility. I was very fortunate to be with such an amazing bunch of people.

On one of our trips back to South Africa, James and I decided to organise a small party at the Masibambane children’s centre in Soweto. They provide day care for young children to allow their older siblings to attend school. We were delighted to receive so many donations of clothes and stationery, which Virgin Money agreed to ship, along with cash donations which we used to upgrade their cooking facilities and buy the centre a TV. It was privilege to visit the centre and see the children – so proud of their school uniforms and determined for their future. 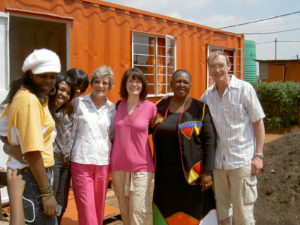 I still work for Virgin Money and enjoy being part of Virgin Money Giving which is a not-for-profit fundraising website. Being part-time is a challenge (I spread three full days over five days a week), but it allows me to do the school run which I love. And Henry has a very active life and enjoys sports so there is a lot of ferrying about after school.

My parents have retired back to Mauritius. My sister and her family now live in Australia, and my brother and his family are in Chelmsford. So we are quite spread out but we do try to meet up as a family and my parents have visited us over the summer this year.

More recently, we have become foster carers in an attempt to try to help where we can. We have had a little boy twice now on respite visits, and we hope to do the same going forward. James and I feel so fortunate to have had wonderful parents and happy childhoods, and hope to be able to help children who haven’t been as lucky.

On reflection, I have been incredibly fortunate to have had such a happy life as wife to my wonderful husband and mother to Henry. Along with that, I’ve been able to carve a career and make my home here in Suffolk. And as a foreigner in the foreign land, I feel truly blessed to have been so welcomed and included. Thank you dear Lord! 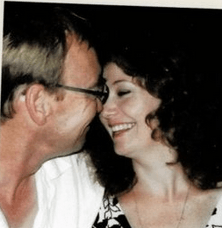