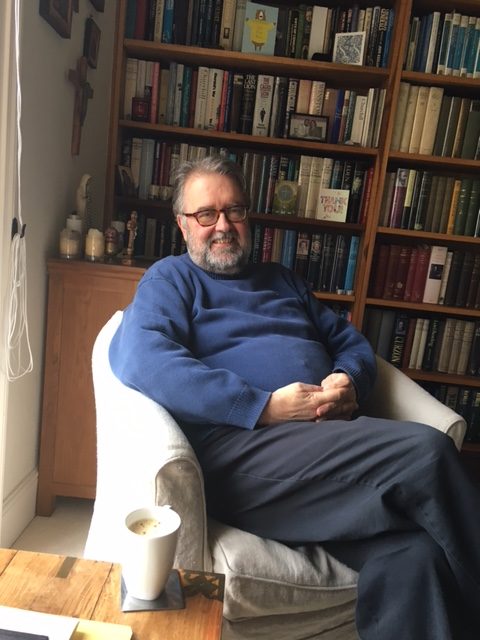 I was born in Birkenhead in 1955. My father was Jack, who worked on Birkenhead Docks. My mother was Doris (“Dot”) from Yorkshire. She was what would now be called a housewife, though later worked as a barmaid. I had two younger brothers, and then a much younger sister.

“I was conscious of being different”

It was rather an odd childhood, as I was conscious of being “different.” People saw me as different because I was bright. In our house there were no books at all, and I bought the first book that ever came into our house when I was about eight: it was “Treasure Island.” The version had no pictures and was not abridged for children. Another example of my background was when my mother came to the UEA after the twins were born. She looked round and said “Ee, our John, this is very nice, but why can’t you come and read books in Birkenhead?” 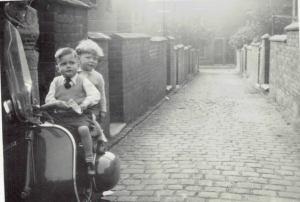 In Birkenhead, taking a young cousin for a “ride”

The family was not Catholic. My father was a Trades Unionist and an atheist. Mother came from a Primitive Methodist background, but was not overly religious. It was a conscious decision on my part as a child to go to church; my mother took me for a while, and I liked it. I had gone to Sunday School between the ages of four and eight, and from this early age it all made sense to me. I had no doubts – why should I apply tests to Christianity that I didn’t apply to the rest of my life? At Oxford I “became” an Anglican, that is to say I was confirmed as a mature candidate.

I went to the local primary school, and after the 11+ I went to a grammar school the other end of the Wirral Peninsula. No-one in our family – before or after me – ever went to university. My father had heard of Oxford and Cambridge, and assumed I’d go there when I said I wanted to go to university; they were the only ones he’d heard of because he used to bet on the Boat Race.

Oxford – “my idea of heaven”

So I went to Pembroke College, Oxford, to read history. It was my idea of heaven – the libraries were open all hours. I then started a DPhil (on Anglo-American policy towards General de Gaulle during World War II), but after two years I applied for a lecturing job at the UEA in 1979. I got it, and stayed there – apart from a Fulbright Professorship in Fulton Missouri in 1992-93 – until last year. I had always wanted to be a teacher; I enjoyed learning and wanted to pass that enjoyment on to other people. So in 1979 we moved to Norwich. I say “we” because in 1977 I had married Dorothea, and although the marriage did not last I am still very friendly with her. We had three children, all boys; twins to begin with and then another one. 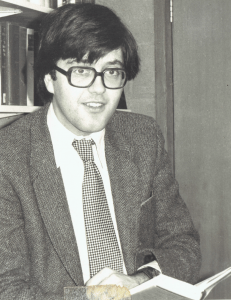 I first taught in the School of English and American Studies, because the UEA in the way of the “new” universities was very much into interdisciplinary learning. I started to write biographies, which made me some money, but which were not considered academic works by some colleagues. There was Duff Cooper, Lord Lloyd, and Chamberlain. I was the first to be allowed to look at Chamberlain’s papers, and this started to change my mind about Churchill and appeasement, and to think Churchill was wrong in his assessment of Chamberlain’s policy and its motives.

I was totally immersed in my work. My father had died in 1977, and in 1989 my mother had been very ill. My wife Dorothea saw me too infrequently: I was either working or driving up to Merseyside to help my mother. This contributed to the break-up of my marriage. Work-life balance was not a thing I had heard of then; perhaps it is still something with which I struggle?

During the Fulbright professorship in the States I published “Churchill: the End of Glory”, questioning whether he was the great hero and saviour that he is popularly thought to be. It was a bestseller, but controversial! I had letters from elderly colonels, apoplectic with rage. 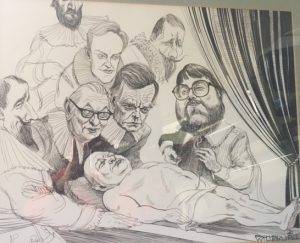 Richard Willson’s cartoon in The Times – the dissecting of Churchill

But it made me very saleable academically, and the UEA wanted me back, and I didn’t feel I could live full time in the USA. I came back to create the School of History. I ran admissions at the university, and made the mistake of showing an aptitude for academic administration. Between 1993 and 2002 I wrote two more books – one was a follow-up to the Churchill work, and heaped more odium and opprobrium on my head. More apoplectic colonels.

“A believer is odd!”

In 2003 I met Rachael, and we married in 2004. I acquired two step-daughters, which is wonderful – an uncovenanted blessing! We moved to Harleston, where we still live despite my recent translation to Twickenham. At much the same time I became Dean of the School of History at the UEA, and expanded it. This suited me as I could indulge in 19th-century history of theology, particularly Newman and the Oxford Movement. I could have read theology but no-one had told me about it! In my academic circles gay would have been fine; left-wing would have been fine – but a believer was odd…!

Until 2012 I ran the School of History, and also in moved into various sorts of academic administration, troubleshooting other departments. It seemed something I had an aptitude for. 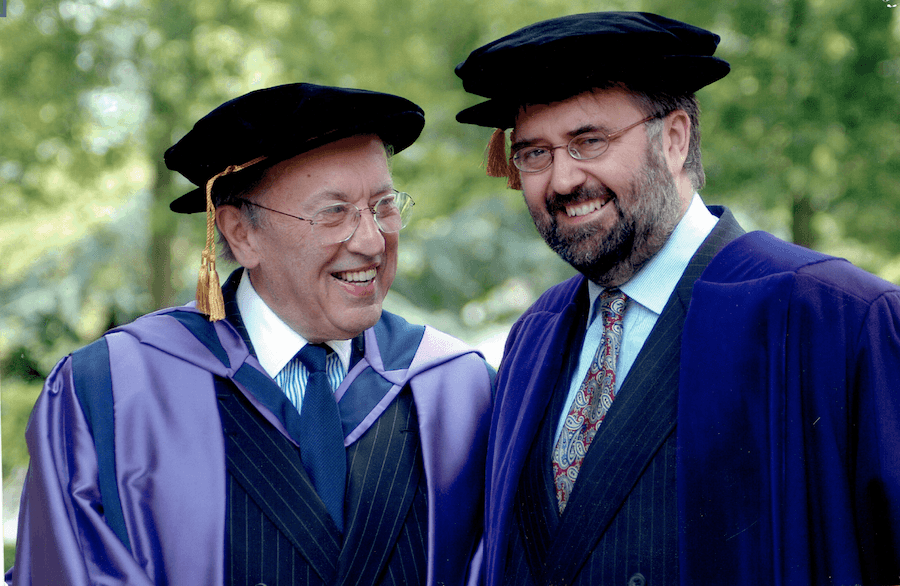 During this period my Anglicanism was being tested. It seemed you could believe whatever you liked in the Church of England, and this didn’t quite match my own vision of what Church should be, and the Anglo-Catholic position became for me increasingly untenable. Eventually I read and prayed myself into an impossibly uncomfortable position in the Church of England. I had been to Orthodox services in North Norfolk, and they were wonderful and very moving, but it wasn’t viable for me. I had started to pray the Rosary, and I felt Our Lady was suggesting I should become a “proper” Catholic. So, I could either become a Catholic or continue shutting everything out. That would have been easy, as I’d have made a decent hermit. But instead I made a phone call – to Father Charles, and the rest, as they say, is history. I like to say it was the worst possible option apart from all the others.

Our Lady was stubborn…

Our Lady’s voice was always in my head; I couldn’t ignore it. She was stubborn! I was received into the Church in 2010 in Harleston, and immediately after I went with other parishioners to see Pope Benedict celebrate Mass in Hyde Park.

I then took charge of the Institute for Interdisciplinary Humanities at the UEA, and worked with the Catholic chaplain. This collaboration resulted in the Newman Lectures, which we are continuing despite my departure.

And then…a head hunter rang me, inviting me to apply to be Pro-Vice Chancellor at St Mary’s University Twickenham. I met Francis Campbell, the Vice Chancellor, and he checked me out. I liked him; he wanted to make a reality of a Catholic university in the modern era. At that moment it was a challenge because there was all the muddle of the merger with Heythrop and then it fell through.

I prayed about it, and decided to put in for it, to take a gamble. I had done most things in the academic life, and this matched nicely with what I’d done as they needed someone to start from ground zero. If I’d stayed at UEA I’d probably have become one of those academic “bedblockers” until I retired, but leaving allowed the next generation to come up. St Mary’s, as a fledgling university, needs me more than the world of scholarship does.

My aim is to make Catholicism seen as something more positive, because to the outside world it isn’t, it’s something narrow. But universities originated with the Catholic Church, and in this pluralistic society there should be room for a Catholic university, to buck the trend towards secularism. I feel I have to give something back, and I have a huge fill of arcane and esoteric experience, and maybe I should give it to St Mary’s for those reasons.

Cardinal Vincent Nichols is Chancellor, and the university is owned by the Church. How does this make it different from, say, Roehampton down the road? Certainly not in quality. Our students can go to Mass every day; there is Eucharistic Adoration; and they can show their faith with no secular pressure. The chapel is the centre of the campus, and the spiritual and pastoral side is there for the students. Their life links with their faith. Talking about faith is ok in a way which was not the case at the UEA. It is part of everyday life, although about 65 per cent are non-Catholic. Francis Campbell is a good man and there is a good atmosphere.

The parish – a real community, a family

For the future? I shall stay there as long as they want me. The travelling is the down side, and my wife doesn’t see me. I am still part of the Catholic parish here in Harleston, and I enjoy that, because it is a real community, a family. 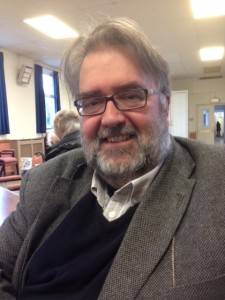