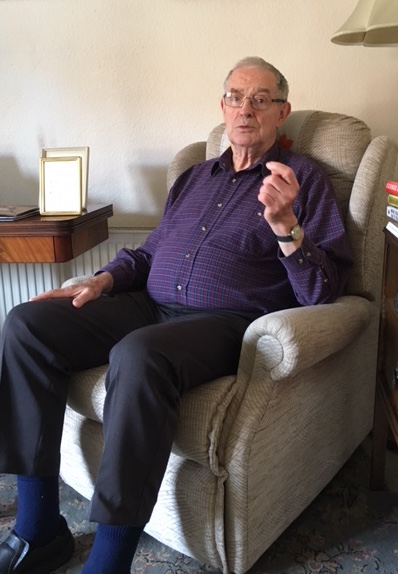 I was born in 1935 in Cleadon, South Shields, Co Durham. Nicholas is my baptismal name; Peter was the name I took in the monastery. My father, from the north of England, was a lapsed member of the Church of England and a solicitor. My mother was an Irish schoolteacher. I was the second of four, with an older brother and two younger sisters.

Because of the War my father evacuated us to Beadnell on the Northumbrian coast, where I went to the village school. My father was a weekend visitor and really played a very minor part in my upbringing. Mother was the ninth child of an Irish farmer, and was “upwardly mobile.” She was a stern disciplinarian, and her Catholicism was a religion of obligation, rather Jansenistic. She took catechism in the Craster Arms for the local Catholics, and I learned the Catholic attitude current in those days that sex was something dark and morally dangerous. My father never discussed these matters.

I found the intellectual side of school easy. At Beadnell we had the freedom of the dunes, and we played with the sons of fishermen and farmers. I loved cricket, but this was frustrating because I didn’t play very well. In 1944 we moved back to town, and that was not a good experience. We all went to the local Catholic school. We said the Rosary as a family in the kitchen in the evening, while my father was in the living room. He didn’t fit in with this totalitarian Catholic world. I think I internalised these unresolved religious differences between my parents. 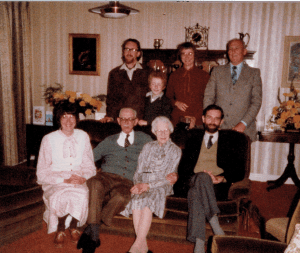 family group in the 80s

I then went to a Catholic boys’ grammar school run by Jesuits, and later by the Irish Christian Brothers. Mother somehow got me into Cambridge through her friendship with the local vicar, as we had no previous family or school connection with the ancient universities.

I did my National Service in the RAF in Germany, and was rather traumatised by the square-bashing. 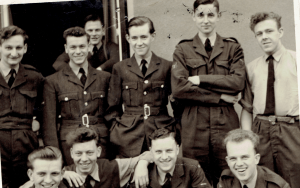 In the RAF (back, second right)

In 1955 I went up to Trinity Hall to read law because my father wanted me to go into his practice. My tutor said I could do two years of history, which I loved, and then one year of law and still get a degree in law. But I never did any law.

At Cambridge I met many Old Gregorians (Downside School alumni). 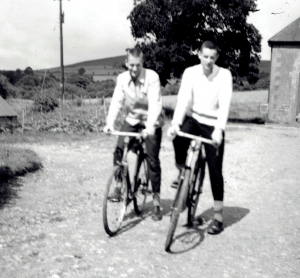 One of them had already decided to become a monk, and that had an influence on me. I frequented the chaplaincy which was run by Monsignor Alfred Newman Gilbey (of Gilbey’s gin). No women were permitted in the chaplaincy! It was an all-male world. But this gave me some sort of identity, which had been lacking as I was socially and emotionally out of my depth at Cambridge among the public schoolboys. It took me at least half a year to get into the life of the place. I played a lot of tennis, and didn’t work very hard. Despite this I got a good degree. 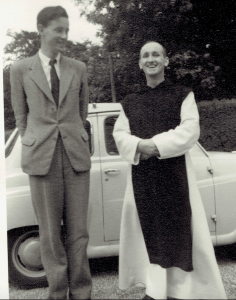 I visited Downside and was captivated by it. It was Advent, and I remember the wonder of hearing the choir singing the antiphons at Vespers; I had always loved plainchant. There were many interesting people there in those days.

I entered the monastery in 1958. My father was extraordinarily good about it, though he was disappointed as he had wanted me to continue his business. It was a novitiate of five: three OGs, Anselm Hurt, a vicar’s son, and me. I was solemnly professed in 1962, and ordained in 1965. 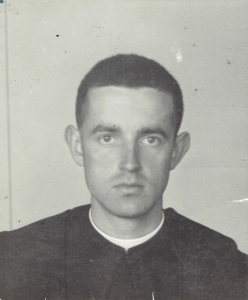 The Abbot wanted Downside to become a centre for theology, and I was sent to Fribourg between 1961 and 65 to do a Licentiate of Sacred Theology. It was alien to me as it taught us to regurgitate, not to think.  Exceptions were the scripture professors, one of whom influenced me very profoundly.

“It was a mistake I had to make”

In hindsight my decision to join the monastery was a mistake I had to make, but not at all something I regret, as those years provided me with a rich range of experience from the inspirational and ecstatic to the nightmarish. 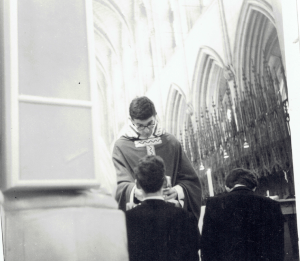 I joined in part at least because I was unable to take responsibility for my own life in the world of grown-ups. In that sense Downside was the making of me, enabling me by the time I left to take that responsibility. A monastery aspires to be an alternative world which to many beginners is immensely attractive, but which proves illusory, as there is only the one world – many-splendoured and flecked with tragedy – in which we find ourselves.

Three monks in particular, Luke Suart, Sebastian Moore and Oswald Sumner (who studied under Jung), opened up such wide horizons as to stand me in good stead later. In exasperation the Abbot of the day told me that I seemed to be the protagonist of those who did not know what the monastic life was about. He said this because I kept asking questions, but also because I obtained a significant number of votes in the only abbatial election in which I was involved.

One abiding joy and satisfaction at Downside was to have edited Sebastian Moore’s first published book, “God is a New Language”, in the late 1960s. This and his later books have been an inspiration to many.

“I was frightened to go, but I knew I had to leave”

Father Luke Suart committed suicide, and after this traumatic event, and other incidents, I knew I had to leave, lest I should be in what Sartre calls “bad faith.” I was too frightened to go, and that was a terrible year. Suddenly the fear lifted, and I was off with £200 in my pocket and no idea of what to do next.  That was 1971.

I lodged in a school friend’s attic in Oxford, and – needing to earn a living – I took such work as was to hand – gardening, trouble-shooting for a domestic agency called the “Oxford Aunts,” and helping with research in the department of the Regius Professor of Medicine (Richard Doll).

In due course I got a research fellowship at the Queen’s Theological College in Birmingham, which enabled me to write my first book, “Death’s Gift: Chapters on Resurrection and Bereavement”, which arose from my involvement in the madness and suicide of Father Luke at Downside. Thereafter I was asked to apply for the post of Tutor in Christian ethics in that college. It catered for ordinands who were mostly from the Anglican, Methodist and United Reformed Churches. We had great fun – and some serious disagreements, though not on denominational lines. There were even occasional tears as ordinands lined up against one another; on one occasion one who denied a woman’s right to choose abortion even after rape. I used to say that I had converted being interrupted into a teaching method.

I was always prominent in the twice-yearly college entertainments, singing at least one solo and reciting large chunks of poetry.

My departure from Queen’s came with the imminent arrival of a new principal, and also feeling I was becoming too much part of the furniture. It was a wrench, as my life had been relaunched there.

Needing time to write, and benefiting from an inheritance, I bought a house in Handsworth (Birmingham), where I was in a minority of white people. This was sometimes chastening, but creative. While there I taught at Newman College, now a university, and on the Diploma of Pastoral Studies in the University of Birmingham. I published my second book, “The Morals of Jesus,” still very precious to me. I wanted to call it “Mortality, Madness and Morals” – this being what the book is about. 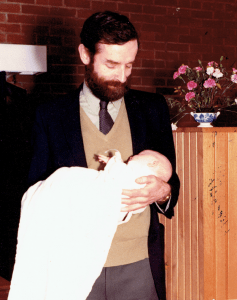 In addition to abiding friendships made at Queen’s, I became a founding member and sometime President of the Society for the Study of Christian Ethics, which improved my status in some academic eyes! And then there is the best group of all: the Association of Teachers of Moral Theology; it’s a small group which has been of tremendous support to me in my life and work. It is remarkable to think that when I joined the group in 1980 there were no women members. Since then, largely thanks to initiatives by Kevin Kelly and myself, it has radically and blessedly changed. 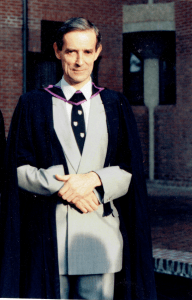 Much of what I have subsequently published – or am about to publish – started life as work in progress presented to this group. It was always available as a sounding board, and an incentive to produce more.

Because of my Queen’s connection I served for some years, by episcopal appointment, on the Bishops’ Committee for Christian Unity under the chairmanship of Cormac Murphy O’Connor. We went a considerable way towards opening up the question of intercommunion , but this initiative ground to a halt through lack of sufficiently determined and imaginative leadership. It was hard to accept.

The bishops also appointed me to the English Anglican-Roman Catholic Committee, the national back-up to ARCIC, where I served for 30 years. Another Catholic member, a layman, said that my role was to say what was obvious but was never said. The Anglican Co-Secretary also said my role was to say things that had to be said…these things were often discomfiting, not least to some of my fellow Catholics.

My last contribution to this, “My Ecumenical Journey”, pinpointed several ecumenical countersigns coming from our Church during those thirty years. Chief among these was the English Bishops’ remarkably ungenerous response to the ordination of women in the Church of England. It was a reflex of institutional fear, and the Catholic press would not publish my article.

I made a major contribution to a symposium on the Church’s ministry of healing in the light of the hospice movement, published under this title.

In Birmingham I had become involved in the Charismatic Renewal, through a prayer and singing group in Edgbaston. It has made me more relaxed in prayer, and it taught me about corporate silence and its value. It taught me to pray in a way the monastery had not done. The belief in the power of the Spirit ties in with the Father Luke story, but in the long term I have not continued in that pattern.

The move to Bungay

In 1993 Edward (Father Edward Crouzet), who had been a friend of mine since university days, had been sent to Bungay to be parish priest, and I visited a lot. I moved here in 2000, but in 2006 Edward was sent to the States in the last days of Richard Yeo’s term as Abbot. But I had made a good number of friends, and it seemed a good place to carry on.

“Talking to anyone who will listen” 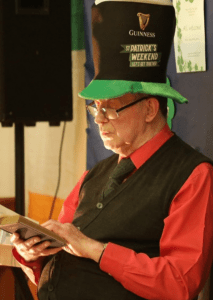 These days I spend my time talking to anyone who is interested. I worry a lot about what I am not doing! At the moment I’m writing a book with Linda Woodhead, and want to call it “Unknowing God.” I read more than ever before – novels, biographies, history – and I belong to an excellent reading group. I have no TV, but am addicted to radio, especially Radio 5 Live, news and sport 24 hours a day.  I have served on the PPC under successive parish priests, and was once the Chairman, elected by the committee.  I enjoy some parish social events. 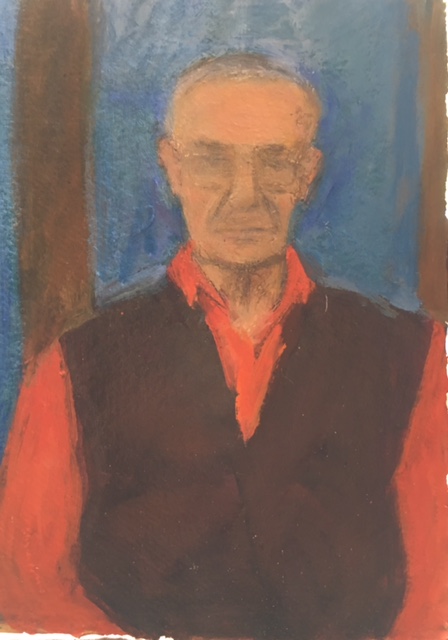