For a second consecutive year, we celebrated a Paschal supper in St Edmund’s Hall. The event proved to be very popular and was attended by 57 parishioners from across the Bungay and Harleston area. 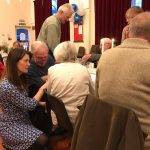 Once again, Sonia Montagu organised the entire celebration and took on the mammoth task of shopping and cooking the roast lamb dinner for all our guests. Importantly, she also chose the order of service which involved both children and adults and enabled us to express our Christian faith by participating symbolically in the story of salvation, whilst at the same time preserving the spirit of the Jewish traditions. This was a community effort, however, and several parishioners brought along cakes and helped Sonia and her husband James with serving the food and clearing up the hall afterwards. 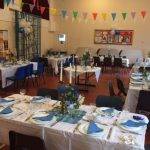 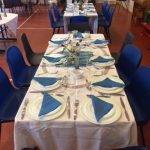 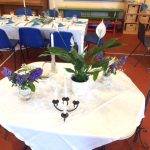 In keeping with the traditional rituals of the meal, the tables were draped with crisp white linen tablecloths and our best crockery and cutlery were used. Each table had a pair of ceremonial candles and a posy of fresh flowers while the hall was decorated with bunting, balloons and candelabras, giving it a very festive atmosphere.Also on show was some wonderful artwork by the children of St Edmund’s Primary School who had been studying Judaism the previous week; the work displayed a great depth of knowledge regarding Judaism and Jewish culture and traditions. 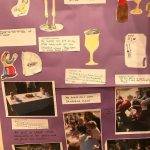 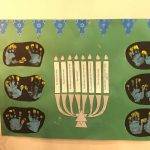 Fr Charles opened the evening with a prayer and closed by thanking Sonia and James and all the helpers who made the evening a great success, in terms of prayerfulness, education, community spirit and cuisine.

What is a Paschal supper?
In Judaism, Passover is the oldest and most important religious festival, commemorating God’s deliverance of the Hebrews from slavery in Egypt and His creation of the Israelite people. Today, the focal point of the Passover festival is a communal meal, called the Seder or Paschal meal. The Seder involves everyone present since everyone has a Haggadah (the printed order of service) and are called to share in the reading of the story of deliverance. While the father or grandfather is usually the leader of the service, others have roles as well. The mother of the home lights the festival candles and the youngest child asks four questions which prompt an explanation of the rituals of the meal. In this way, the Seder meal is more than a celebration: it is an elaborate teaching experience, especially for the children. 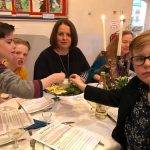 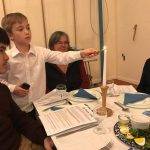 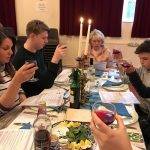 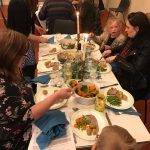 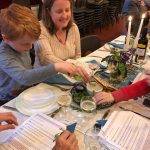 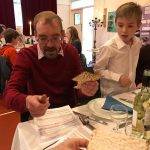 Why do Christians celebrate a Jewish festival?
There has been an increasing interest among Christians in the ancient festival of Passover not least because of a renewed awareness of the importance of the Old Testament Scriptures as Christian Scripture. There is also a growing interest in exploring new and innovative ways to worship and also, to understand the culture and rituals of other major religions.