Parishioner Mary Kirk was commissioned earlier this year to paint a diptych (= a painting in two panels) for the well-known Camino Pilgrim guide writer known as Johnnie Walker, who moved to Santiago de Compostela after a first pilgrimage on the Camino from Seville to Santiago changed his life for ever. Johnnie Walker had commissioned two portraits from her previously after seeing her work online. Mary travelled to Santiago on 19 October to meet her patron and other well-known Camino figures. 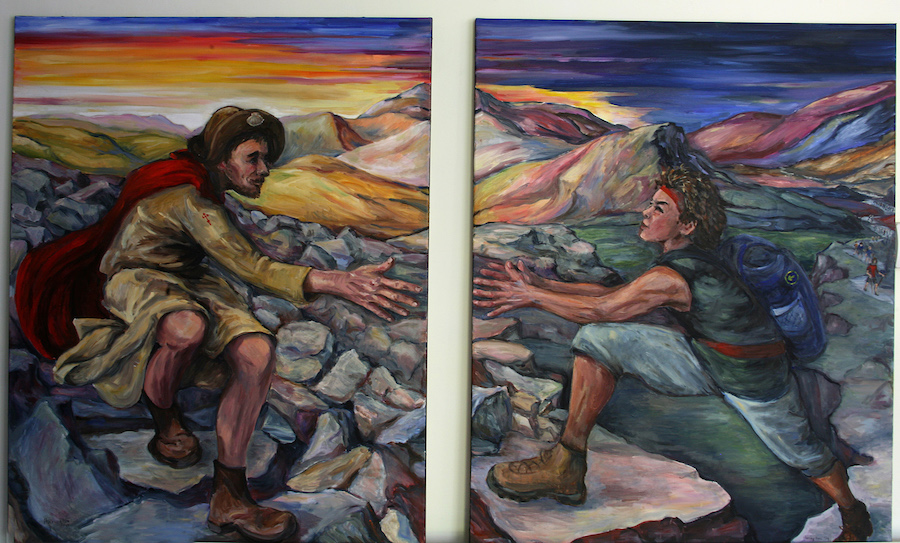 I was honoured to be entrusted by Johnnie Walker to paint what was originally to be one painting.  John gave me the briefest of briefs: “To symbolise pilgrimage…with maybe one androgynous pilgrim.” The commission then grew into a diptych since the wall for which it was destined is vast.

Obviously there had to be clear references to the Camino, for although John – and I – have walked pilgrim routes elsewhere, the Camino remains the wellspring of our pilgrim journeys. It was an enormous privilege to be able to “give something back” to the Camino in this manner, which called upon both my experience and my faith. It was a very personal undertaking which had to have universal significance.

What can be ‘seen’ in the diptych?

I considered making the modern pilgrim a person of colour in order to show that Santiago is no longer to be seen as ‘matamoros.’ I decided not to be specific: not necessarily male or female, Western or Eastern, but to be the universal pilgrim. I also deliberately used colours reminiscent of stained glass.

There is a slight nod to Michelangelo in the near-touching of the fingers.

The paintings painted themselves. I just started with the idea of the pilgrim past stretching out to help the pilgrim present. The rest followed.