St Edmund’s Parish is part of the Diocese of East Anglia, which is divided into eight deaneries which in turn divided into 59 parishes. We are part of the Coastal Deanery which includes Beccles, Bungay, Gorleston, Lowestoft, Poringland, Southwold and Great Yarmouth.

Our parish boundary is roughly a radius of 20 miles centered on Flixton and passing near Hempnall, Brooke, Kirby Cane, Rumburgh, Laxfield, Stradbroke, Brockdish and Pulham Market. 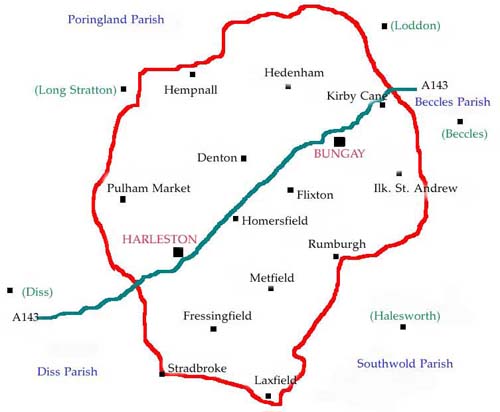 The parish of St Edmund, King and Martyr, grew out of the Flixton Mission. An English Benedictine priest, William Walgrave, lived at Flixton Hall, three miles from Bungay, from 1657 until his death in 1665.

Later in the 18th century, Flixton Hall passed into Protestant hands and the ‘Priest’s House’ in the village was built by the family for the use of the Benedictine missioners. The Mission continued in Flixton until, in 1821, some land in the centre of Bungay, which had been part of the site of the medieval Benedictine convent there, was donated to the Mission by its owner, the Duke of Norfolk.

The first Catholic chapel in Bungay since the Reformation was opened in 1823. which was replaced, once it had become too small, the present, more ornate church and presbytery in 1891. 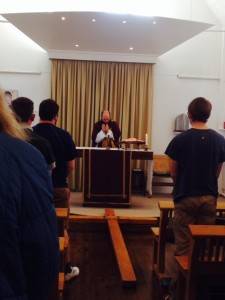 Until the late 1990s Catholics living in the western end of the parish worshipped in the former Baptist Chapel in Wortwell. Fr Edward Crouzet OSB, who took over as parish priest in 1993, felt that this chapel was too remote from the growing centre of Harleston, and that it gave no room for expansion.

Spurred by the arrival of a new Catholic family in Harleston, and the fact that the town itself was rapidly growing with new estates being built and more planned, Fr Edward called a meeting of parishioners when the Jay’s Green Youth Centre (formerly a school) came up for sale. He felt that the provision of meeting facilities at the centre could be put at the service of the wider local community, which would enhance the role of the chapel and its congregation.

The centre was leased from South Norfolk District Council between 1999 and 2001 when the purchase was completed after the sale of the Wortwell chapel. Before the conversion was complete Mass was celebrated on Saturday evenings at St John’s Anglican church in the town centre.

Parishioners helped convert the games room into a chapel. It was painted white; the altar step was created by a boat-builder; the altar itself built by the joiner son of a parishioner, and placed slightly off-centre to allow for future expansion into and L-shaped extension. The pews were later made by local craftsman Len Gurney, husband of a parishioner.

The chapel, dedicated to St Thomas More, was blessed and opened by the then Bishop of East Anglia, Peter Smith, on 21st June 1999. The L-shaped extension was completed in 2004-05