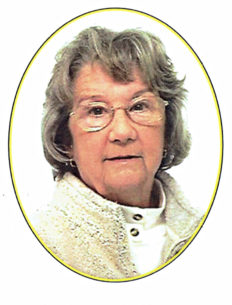 Brenda Williams was a much-loved, valued, and active member of the Jay’s Green community within this parish.

She and her husband Peter came to harbour in Harleston after a life spent on the move. They arrived in February 2000, and Brenda’s first encounters in the chapel of St Thomas More set her course for the next 18 years. The first person Brenda glimpsed was the then sacristan, Alma Chapman, and almost immediately Brenda took on the unofficial role of assistant sacristan. Thereafter and until ill health prevented her recently Brenda washed linen, did the flowers (no-one had arranged flowers at St Thomas More before that), and cleaned. Indeed she and Peter often took on the cleaning of the entire building, both chapel and community areas.

In addition, Brenda was always willing to cook and bake whenever parish and CAFOD events required it.

Brenda came from Yorkshire, where her family had been greengrocers, though her Catholic father had been a civil servant. Her warmth and generosity belied the fact that she was an only child. After a convent education Brenda worked for the Readicut Wool Company, and after a secretarial course at night school moved to Plymouth with a job at the South Western Electricity Board.

There she met Peter, and after an ardent and unsuccessful courtship on his part, she eventually gave in and married him when they were both 22.

There followed not only five children (and later nine grandchildren) but many moves, earning the couple the epithet of the “wandering Williams”: Cyprus, where she was at her happiest, Germany twice, Manchester twice, and East Anglia. She and the children did not follow Peter to Northern Ireland at the height of The Troubles. During Peter’s working life Brenda worked with SSAFA (the Armed Forces charity), and the “Hive” (Help Information and Voluntary Exchange) in Hanover. Their nearly 19 years together in Harleston was the longest period they had been in any one place.

Brenda Williams’s faith was important to her, and her life demonstrates that it was lived in faith.

When asked what epitaph he would choose for Brenda, her husband Peter said: “She was a good and faithful wife, an excellent mother, and a very loving grandmother. All her children, her grandchildren, and I adored her.” There are many in this parish who would echo that sentiment. 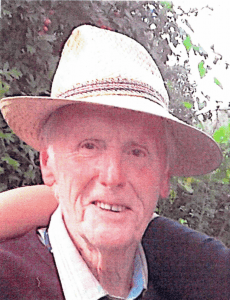 Born to schoolteachers Frederick and Rosanna in Stalybridge, Lancashire, in 1930, Joseph was one of eight Duckett children, another of which, Terri, died a few weeks before him. By all accounts life in the Duckett household during the 1940s was rambunctious.

As a boy Joe excelled at sport. He was Stalybridge swimming champion one year and in his youth he opened the batting for Hadfield St Charles. He had trials for Crewe Alexandra FC, but perhaps his most notable sporting achievement came in 1950, when he turned out for Stockport County in the Third Division North.

As a boy, Joe used to watch men trudge wearily past his home, covered in dust and looking like ghosts, after a 14-hour shift at the local cotton mill. He followed in their footsteps briefly as a student, until in his twenties he found his calling teaching children with special needs, and then later RE in several Catholic schools in the Manchester area.
Joseph met his wife, Kath, at a dance in Stalybridge and they hit it off immediately, but the romance was not without its problems. Kath’s parents were opposed to their only child seeing a Duckett, who were well known in Stalybridge for being tearaways, and worse – Catholics!

However, they overcame the prejudice and resistance to forge a strong and loving union that was to bring four sons. Joe’s pursuit of his teaching career meant that in 1970, the family was on the move. Five years were spent in Dortmund educating children from the Armed Forces. This was also a period of great adventure. Joe bought a caravan to make the most of being able to drive from country to country on a budget. Belgium, Luxembourg, Spain, Yugoslavia and France were all conquered in a Peugeot 504 estate.

On returning to England in 1975, he and Kath bought Bramble Cottage in Blundeston, and Dad secured what was to be his final teaching post – Deputy Head at St Edmund’s RC School in Gorleston. By all accounts he was a greatly admired and respected teacher and evidence of that is in the presence of several of his former pupils here today. During the final years of his teaching he and Kath became interested in antiques and what started out as a hobby, was to define the second half of his life.

After Kath died in 1983, Joe was left to fend for himself and two sons. However, he met Cilla, and a whirlwind romance ensued. They married just four months later, and Joe was welcomed into the Moore family by Diana, Charles, Jimmy and John.
Joe retired from teaching the next year to follow his heart into the antiques trade. Together with Cilla, they made an immediate success of it, operating out of centres in Beccles, Bungay and Wrentham. So much so that he realised he needed a bigger vehicle to transport his collection of wardrobes, beds, chests of drawers, etc. Nobody expected him to buy a fish and chip van to fit this brief.

The business continued to thrive as Joe discovered he had a talent for renovation, as well as wheeling and dealing. He found a rambling and run down property in Bungay, recognised its potential, and after major renovation with the help of his nephew Pat Heizer, it became their home and business.

Joe’s time in Bungay with Cilla was fulfilling as they replaced the church community they enjoyed in Lowestoft with that of St Edmund’s.

In his twilight years, he suffered from increasing dementia, but he still took great pleasure from spending time with his grandchildren and friends, as well as walking his beloved dog, Rosie, in the Suffolk countryside. Increasingly, he could be found with a pen in his hand as he continued to write poetry on a daily basis – witty and personal birthday tributes were a speciality.

Joe Duckett had a deep faith his whole life and when his time came he had a wonderful and peaceful death. In your prayers, please remember Joseph Duckett; antique dealer, teacher, poet, Catholic and friend to all. 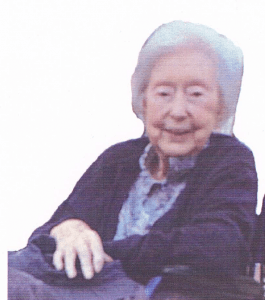 After a childhood spent in Gorleston,  Joan’s three elder brothers, Archie, Ernest and Bill all volunteered to join the Army at the start of World war II, and insisted that Joan and her mother leave Gorleston and move to Scotland to be near family, as East Anglia was considered at risk of invasion.

Joan had enjoyed school up to that date, starring as Portia in the ‘Merchant of Venice’, appointed sports captain for girls, taking part in athletics and games which included a near miss to her eye from a hockey ball.

Once in Scotland, she joined County Food Control to help with the dispensing of food stamps.  When she was 18, the following year, she volunteered to join the Royal Electrical and Mechanical Engineers.  She learnt to drive both cars and lorries in the days of double de-clutch.  She remembered one of her first outings in a lorry driving down a country lane, a cyclist coming the other way took one look at her face peering over the wheel of the lorry and jumped with his bicycle into a ditch until she had safely passed.

Joan vividly remembered one night, when to avoid an anticipated targeted German attack, she drove a lorry loaded with live ammunition from one side of London to the other, in convoy, through the blitz.  Joan was mainly based in South East London during the war driving a brigadier in his staff car to inspect the gun sites in the royal parks and the London munitions sites.

After the war, Joan was offered a place at Goldsmiths Art School but, finding herself in a class with accredited war artists, decided she wasn’t skilled enough and that she would study domestic science and home economics at Cardiff with her best friend Wendy.  However, painting continued to be a source of great pleasure throughout her life.

Once qualified, Joan returned to Gorleston to live with her mother as her three brothers were now married.  Joan was appointed manager of the Brunswick Hotel in Great Yarmouth and remembered busy Saturdays coordinating up to three wedding parties in one afternoon. She then went on to teach domestic science, first in Norwich and then at the Edward Worledge Senior School in Great Yarmouth. During the 1953 floods, Joan borrowed a family bicycle and rode through the floods to help clear up the mess left behind in the ovens and on the equipment in the domestic science rooms. When she left the school to get married she held a tea party for some of the older girls.

After  marrying Maurice she helped him with the administrative side of running a busy sole general practitioners practice in King Street, Great Yarmouth, together with looking after their three daughters.

Great Yarmouth was a busy holiday seaside town in those days and she remembered pushing the pram with Clare in it down York Road for a walk one day with Micky the family dog on a lead.  Micky suddenly refused to go any further, she saw to her horror on the other side of the road, a trainer from the circus exercising a lion on a lead.

Joan had a great sense of style and was a good needlewoman.  She made dresses, coats and hats for all three daughters who when they were older enjoyed choosing patterns and fabric which she would make up for them.

Joan was a wonderful cook who enjoyed preparing dinner parties and entertaining visiting family and friends, making it all appear effortless. She enjoyed experimenting with new dishes and menus and was a great fan of Graham the Galloping Gourmet and Keith Floyd. When she could no longer entertain, she greatly relished going out to lunch with her daughters and their families.

When Maurice’s GP practice merged in the 1960s, the family moved  to Marine Parade in Gorleston. Joan loved the garden and discovered a talent for growing flowers and vegetables from seed.  She successfully grew sweet peas, tomatoes, courgettes, runner beans, peas and herbs every year. She also loved being able to walk down to the beach from the house, to swim in the sea with Maurice at lunch time.

Joan took great pleasure in her role as a grandmother to her five grandchildren, Sophie, James, Georgia, Joel and Matthew and her step-granddaughter, Jo.

When her daughter Maggie was teaching at Elmtree Primary in Lowestoft, Joan attended Maggie’s class every week to hear the children read.

The weekly art group meetings in Gorleston were a source of friendship, fun and inspiration for Joan after Maurice’s death.  She carried on attending even after her move to Beccles until she became too frail to continue.  She has left behind many treasured framed paintings which hang on her daughters’ walls.

After her move to Homefield Paddock in Beccles, Joan found a friendly community of neighbours and enjoyed the regular coffee mornings.

Joan’s last few months were spent at Holmwood Residential Home in Bungay, were she appreciated the supportive care and attention she received from the wonderful staff there.