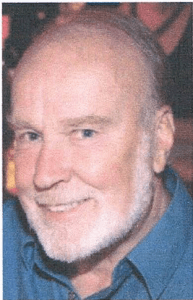 The following appreciation of Frank Rouson’s life is taken from the eulogy given at his funeral by Father Charles.

Frank Rouson was a devout Catholic from his conversion as a young man to his life’s end in March 2017.  At heart he was  a 1950s “fortress Catholic”, who knew his catechism and relished the traditional certainties of that era, and yet he was ahead of his time as a strong ecumenist even before the Second Vatican Council.  In Bungay he served for many years as St Edmund’s lay representative in the unity group “Churches Together in Bungay”. He had  strong instincts of loyalty and service both to the parish congregation and to the wider community, especially within the town.

It was typical of Frank that when age and infirmity reduced his scope for other forms of service, such as holding office as President of the Norwich Circle of Catenians, he was not ashamed to take on a humbler form of service to the local community as a “lollipop man”, in which role he became well known and much loved by a whole generation of children in this town. Even that duty fell prey to increasing ill health combined with the task of nursing his wife, Jo, in her slow decline. Of Frank it is surely true that nothing became him so much as the manner of his closing years and the security of his faith in Christ’s redemptive love.

Francis Anthony Rouson – Frank – was born in Camberwell, in 1937. He had a much older brother, Bill, whom he idolised. He did well academically, getting into grammar school and then straight into work as was then expected. He got a junior job in the City but from an early age had wanted to go into the armed forces and so joined the RAF where he made life-long friendships. However, a long career was not to be as he was diagnosed with asthma and returned to the City, where his career in insurance took off.

Frank had converted to Catholicism as a young man and at a church social met Jo. They were married in 1961 and honeymooned in Guernsey, falling in love with the island to which they returned regularly – the last time to celebrate their 50th wedding anniversary.  They had three sons, Mark, Steve and David. Frank was soon approached to manage an insurance branch-office in Crawley. He did well, and not long after successfully switched to running his own business.

The Church was an important part of his life and he took an active role in the local parish. He had professional links with the Crawley Pakistani and Bangladeshi communities and friends in the Sikh, Hindu and Moslem faiths and was a guest at various religious events – church unity and inter-faith fellowship were an important concept to him well before the idea became established in the mainstream.

In his early fifties Frank was seriously ill, resulting in a heart by-pass operation and several weeks in hospital.  While Jo had always engaged in a wide range of activities, Frank had focused on work, home and church. Following his operation, and with his sons now forging their own ways in the world, he started taking a keener interest in other matters. He joined the RSPB, the Royal British Legion and the RAF Association. He also became more active in the Catenians.

As old age approached, Frank and Jo had decided to downsize and move away from the bustle of Crawley for their retirement. For several years they spent weekends and holidays searching for the ‘right’ place. It had to be small enough to have a sense of community but large enough to have the facilities required by an ageing couple. It had to have an active Catholic church to which they could contribute, and a WI for Jo and a British Legion for Frank and, most importantly, it had to have a least one good pub.

So they settled, here in Bungay, quickly finding themselves part of the community. They genuinely loved living here. They both enjoyed the nearby Broads and the bird reserve at Minsmere and could often be found hand-in-hand bird-watching.

When Jo became ill and bed-bound, it was a scenario that hadn’t been envisaged. Frank had been the one with a growing series of ailments and it had been assumed he would be the one ‘to go first’. He was a diligent carer and although it was a difficult time, mentally and physically, he appreciated the support of family, friends and the community. Jo died two years ago and Frank had increasing issues with his heart, and his mobility was deteriorating. During a very boozy Christmas dinner, he and Mark decided that he should move in with him in Sussex.

There was a possibility that an operation on his heart would increase the quality of Frank’s life, however, because of his growing frailty, there was a strong risk. The decision was Frank’s and he went ahead with the operation in October. To begin with it seemed the operation had been successful but a second operation had to take place a couple of days later and he spent his last three month in hospital. He knew his end was rapidly approaching and had no fear of death. He was in his 80 year.

May he rest in peace.