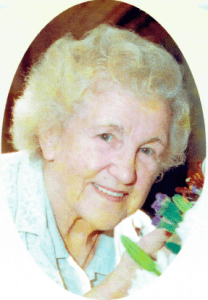 The following is adapted from the homily preached by Father Charles at the funeral of Mary Webb on 15 March 2016, and stands in place of an obituary.

What unites us all here today is our common esteem, love and affection for Mary and I have to say how pleased I was to have anointed her with the sacrament of the sick when she first arrived in the hospital in Norwich, since when she has been in the spiritual care of the chaplaincy team in general and Father Rocky Seelan in particular. She was anointed again at the nursing home shortly before she died. We mourn her passing, we comfort Helen and her friends in the shock of their loss and we celebrate and give thanks for a unique life. But above all we confidently pray for a merciful judgement upon her immortal soul. As St Paul famously said “I have fought the good fight, I have finished the race,” and that surely can be applied especially to anyone who has bravely faced and patiently endured problems in their life, yet persevered to the very end.

Although she lived nearly all her adult life in England, Mary was by blood and at heart an Austrian. We all know that she had her own very special cross to bear in her early life as did any young person who found themselves trapped between British sympathies and Austro-German domination in the war-ravaged city of Vienna during and after the Second World War – and how hair-raising were some of her stories of life at that time under constant threat of bombardment, starvation and betrayal. And yet in some ways that was the background and even the making of the very lovable personality that she was. Together with her dear friend Valerie, she was a most regular attender at our Sunday morning Mass here and at coffee afterwards where she would be the life and soul of the party, and I regret now that I never took up her invitation to tea at her home to makes notes of her amazing war-time experiences. 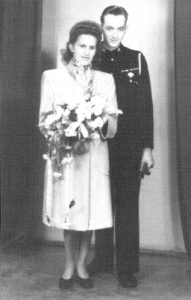 As I have often suggested in my Sunday sermons, child-likeness is not the same thing as childishness. Rather it is a lack of clutter in the mind and leaves a person free to be precisely what Jesus was commending: for it is to such as these, he tells us, that the Kingdom of God belongs. Mary’s faith was always, I felt, simple and unshakeable and the rock-solid basis of her cheerful and confident outlook on life. For anyone who had the sort of instinctive simple faith that I sensed Mary had, the prospect of being enfolded by her all-loving and, fortunately, all merciful Creator and Judge must have been less daunting than it would be for most of us with all the clutter we seem to carry with us, and it was wonderful to witness the way in which she faced that challenge.

We can take enormous courage from the way she coped with the relatively long process of dying, even at such a good old age. But most of all we take encouragement from her belief in death as the gateway to Resurrection. Perseverance to the end is something that we all recognize as a real achievement and the sort of death for which all of us would pray.

We will of course want to pray for her: for this is the way in which we express our belief that we make our way to God’s Kingdom, not alone, but as a community, a congregation even, helping one another through the ups and downs of life by our love, our support, and our prayers.

Eternal rest grant unto Mary, O Lord, and let perpetual light shine upon her. May she rest in peace. 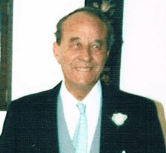 The following is the tribute to her father by Sarah Farr, née Hearth:

My father was a gentle, kind and humble man. In the way of our modern world it is true to say that he never achieved great things. He didn’t acquire wealth or hold powerful positions. He didn’t walk with princes and business magnates, and although very able to meet them on their own terms, he was equally at home with people who had nothing. When Mum and Dad adopted Jackie, my sister, he opened his heart to her and even when she went through her most challenging times, somehow he always managed to have faith in her. He had a smile and a kind word for everyone. He was quiet and courteous, and was quite simply loved by everyone who met him. I cannot count the number of people who have expressed this to me over the years.

My father had two careers, in different fields. His first was in shoes, with two successful shoe shops of his own before he was headhunted to become a director of Shoe Corporation of Africa where we all ended up, including grandmother, dogs and grand piano for three special years. Part of his role was to visit the tribal homelands and I have a vision from stories told, of him squatting in a mud hut trying to persuade African chiefs to buy shoes for their people! When he came home, at a difficult time in his life, he turned his hands and brain to mechanical engineering, establishing us safely in East Anglia. He and Mum loved being part of the Bungay parish and worked tirelessly and joyfully in the parish here for nearly 40 years. Very few people know how much money Dad gave quietly to people he and Mum considered were more needy than themselves. Even when occasionally there weren’t two beans to rub together, he and Mum could always manage to find half a bean to give away.

Dad had three passions. The first, and most important, was my mother, whom he adored, and I have been so fortunate, in his dying hours, to witness such an outpouring of mutual love and affection as befits a marriage that lasted for 54 years. He cherished his family and was immensely proud of his grandson.

His second passion was for classical music, particularly opera, and many times during my childhood I remember Rigoletto being belted out at top volume and heaven help the neighbours!
His third passion was his love of an evening in the companionship of good friends. He treasured the many strong friendships developed both in the parish and in and around Bungay. He was an erudite and well read man who loved nothing more than a good discussion, with many sessions lasting into the wee small hours. He would have been so happy to see everyone here today and to raise a glass with us all.

He has always been my hero and I am so proud that I can offer him as a role model for my son. He did his best, in a complex modern world to lead a Christian life. He may not have been “great” as the world counts it today, but his was a quiet light which shone brightly and for me, the world will be a darker place without him.

My mother and I would like me to take the opportunity at this time to thank everyone for their kindness and prayers. We have all been so grateful for the love and compassion showered upon us at this very difficult time.