Sunday 29 January marked our first Family Mass of 2017 and was probably the most highly attended to date.  It was a joy to see so many faces, old and new, including the families of the children preparing for their First Holy Communion. 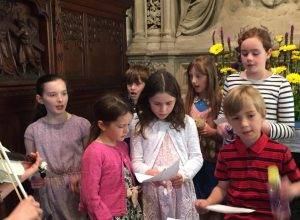 As ever, parishioner Caroline Coles worked closely with Deputy Head, Sam Barlow, to ensure that children from St Edmund’s school, along with other children from the parish, were fully involved in the Mass.   They led most of the hymns, did the readings and bidding prayers, and joined in the Offertory procession.

Fr Charles directed a special homily to the children, based on the Beatitudes, as recounted in the Sermon on the Mount in Matthew’s Gospel.   He told the children that the Beatitudes could be regarded as good rules for life and advised them that, as we all have done or said something that we later regret, then it is a good idea to think twice before doing anything “iffy”. 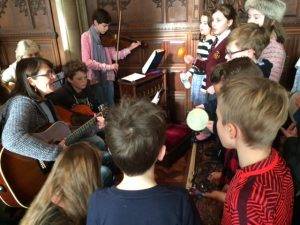 The children’s choir, accompanied by violin, guitar and shakers, have grown in confidence and sang their hearts out while the newly formed school choir (beautifully turned out in their crisp uniforms) stole everyone’s hearts with their rendition of Share the Light and There is Someone Who Knows Me.

After Mass, we had a special celebration in the hall to mark Fr Charles’ birthday…and, yes, we had more singing and, huge thanks to Aida, some delicious birthday cake!

Many thanks to everyone involved in making our Family Mass such a special parish celebration.   Our next Family Mass is on 26 March (Mothering Sunday) and we look forward to sharing it with our growing parish community.