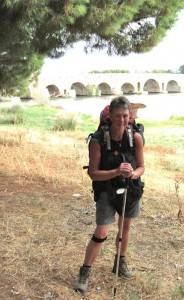 One of many Roman bridges

The Via de la Plata from Seville to Santiago, 2013

Roman bridge: This was day nine out of Seville, and was at Mérida (from the Latin “Emerita Augusta”), whose Roman remains are some of the best preserved through the Roman Empire. The day I arrived there, and the following weekend, there was a Roman festival – everyone dressed in Roman dress, and the Vth Legion marched in over that very bridge, all the commands being given in Latin! There were many Roman bridges all the way north on the Via de la Plata (Silver Road). 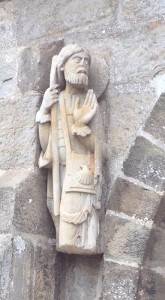 The Statue of St James dressed as a medieval pilgrim is one of many similar, but this one is on the Cathedral in Santiago de Compostela, where it is believed St James is buried (below left). 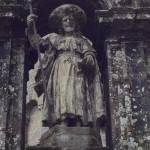 This is the earliest known sculpture of Santiago Peregrino (right).

Starting at dawn…The 25-mile or 40km day was the longest distance I walked in one day. It took me under the Roman Arco de Cáparra, one of the best-preserved Roman triumphal arches anywhere. Starting before dawn, it was a long, long walk under a hot sun 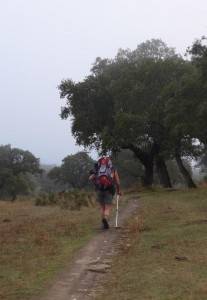 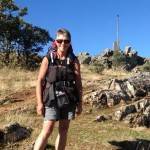 Nearly halfway was just south of Salamanca – the 500km mark.

Arrival: after a Biblical 40 days and 40 nights the emotion of arriving once again in Santiago was great. Walking into the city I crossed the bridge where three months earlier 78 people died in a train crash. It was a day of tears and joy. 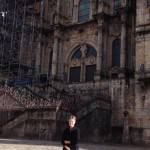 The Cathedral is always full for the Pilgrim Mass, and on that day the enormous censer, the Botafumeiro, was swung – adding to the upwelling of emotion. I always think I would crawl on my hands and knees to arrive in Santiago.