Welcome to the parish’s  CAFOD page, keeping you up to date with news, events, prayers and information on how you can help support this, one of the parish’s two chosen charities. If you would like more information, or want to be involved in CAFOD’s work, please email mary.kirk@btinternet.com.

To donate to CAFOD go to https://cafod.org.uk/Give 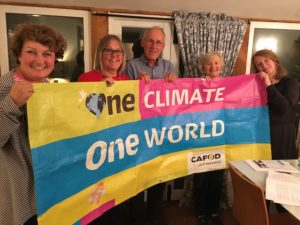 Starting only in July because of Covid restrictions, the CAFOD teams in Bungay and Harleston raised a total of £1954.75 for the charity this year. The Bungay team (Jenny Beaugeard) now has a CAFOD card reader for donations, so if anyone would like to make the total up to £2000….you know whom to ask.

Click on the link to see our monthly update for December 2021. 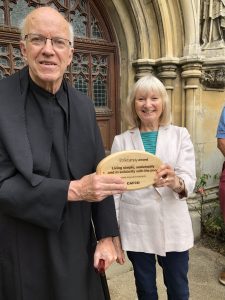 Fr Charles and Shirley Kalinauckas with the Live Simply plaque 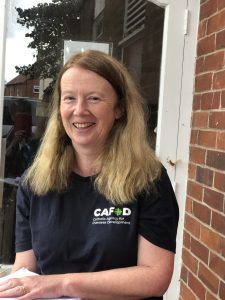 Jane Crone, CAFOD East Anglia, who supported the team through the application process 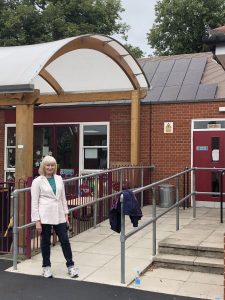 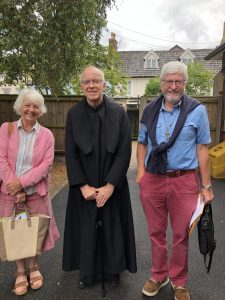 Fr Charles with the two assessors from North Walsham, Claire and Rob Hardy 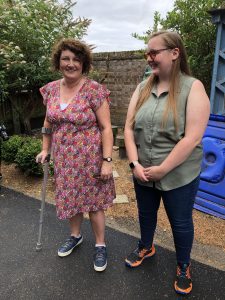 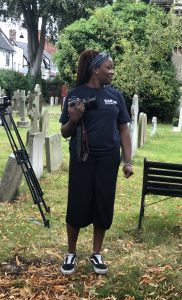 CAFOD stalls at the Fressingfield Produce Market have now resumed, and the dates for the rest of the year are: 21 August, 18 September, 16 October, 11 December. 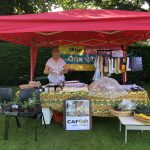 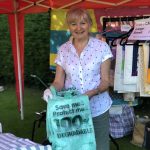 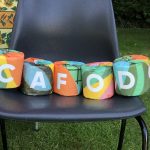 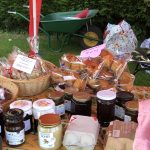 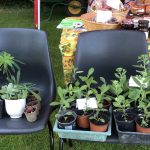 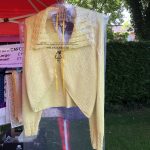 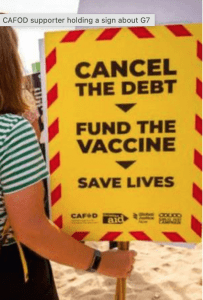 Only four people in the parish took part in the CAFOD Walk for Water Lent appeal: Mark and Shirley Kalinauckas and Helen Kemp who all walked 10,000 steps for 40 days, and Father Charles who cycled 200 miles. This has produced a record sum raised for CAFOD by this parish of £1943.

Well done to those who took part!

Successful sale of cot quilts at Laxfield for CAFOD 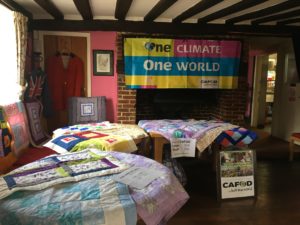 On the first Saturday of August 2019 two of the CAFOD team, Shirley Kalinauckas and Mary Kirk, were at Laxfield Village Market to sell Felicity Todd’s beautiful cot quilts. These unique and colourful items double as play mats, and have even sold as a lap and leg warmer to an elderly lady. The sale on this occasion raised £85 for CAFOD.

This has been a successful year in terms of CAFOD activities within the parish and, with the installation of solar panels on the roof of the school hall, a significant contribution has been made by the parish towards implementing some of the aims set out in the Papal document Laudato si’. 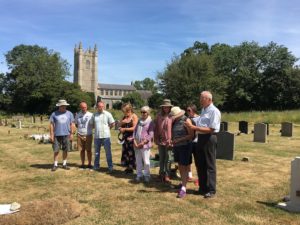 Both before the parish barbecue in June and at the parish outing to Hoxne Church in July last year we were able to use the pilgrimage to St Edmund’s monument as a Share the Journey walk/signing of postcards (to send to the government regarding the treatment of refugees), thus contributing to CAFOD’s national 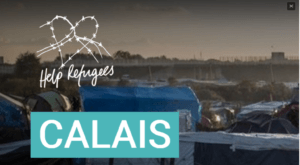 campaign in support of refugees and migrants.  One of our parishioners, Mary Kirk, appealed to the parish for funds and items of clothing for a refugee charity in Calais  (Help Refugees at the Auberge des Migrants)at which she volunteers.  The parish responded most generously to this appeal, with almost £500 raised and many items collected.  Mary also recently undertook the Refugee Ration challenge and parishioners have helped raise over £2000 towards this.

This year CAFOD’s national campaign, ‘Care for our Common Home’ is focused on environmental issues.  In June Andrew and Cathy Scott kindly hosted a house Mass with this theme and attendees were encouraged to sign a petition which CAFOD will be sending to the government urging it to ensure net zero carbon emissions by 2045.

Some of the CAFOD team have continued to raise funds for two parishes in Peru by holding a stall at the Fressingfield Community Produce Market six times a year. 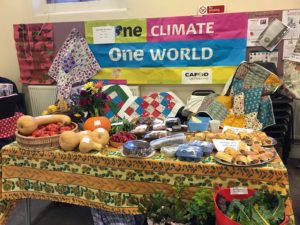 Not only did we raise over £1000 last year but the stall is also an opportunity for bringing people’s attention to the work and aims of CAFOD.  Particular thanks must go to Felicity Todd, who has boosted the amount raised by her production of beautiful cot quilts for sale.  We tend to rely on the same regular band of people who provide items for the stall and would appreciate more people getting involved with this, particularly from the Bungay part of the parish. 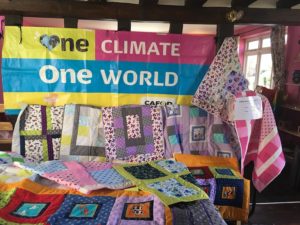 The official launch of the solar panels on the hall roof took place in May and this enabled us to highlight the parish’s involvement with CAFOD in diocesan and national Catholic media.

After such a successful year, the CAFOD team will be contacting the PPC in relation to applying for CAFOD’s Live Simply award for the parish. 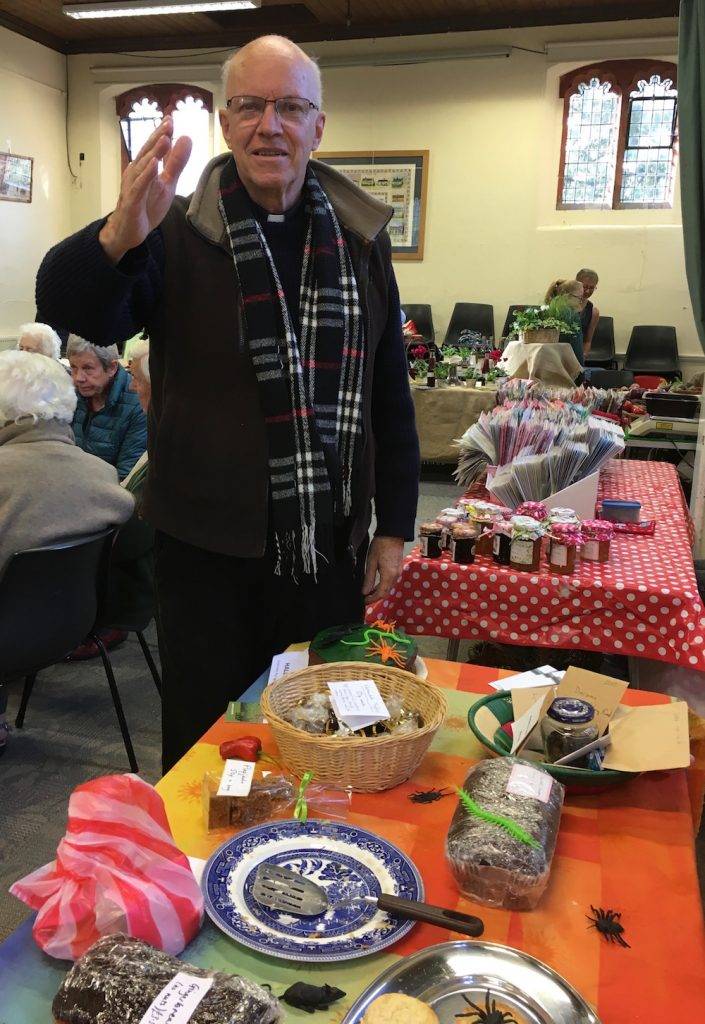 On Friday 30 June 2017 I attended a study day at the Cathedral together with lay representatives, priests and deacons from more than half the parishes in the diocese – and the Bishop. The event was organized by CAFOD and centred on a truly inspiring and gripping theological presentation of Laudato Si’ (Pope Francis’s 2015 encyclical on care for our common home) by Father Augusto Zampini Davies.

I think it was obvious by the end of the day that the Holy Spirit was present then – in the presentation, the debate, the commitments made – and in the singing and sharing of food.

CAFOD’s East Anglia officer, Stephen Matthews, has prepared a report on the day, in which can be accessed Father Augusto’s presentation and the closing prayers and presentation by CAFOD’s Susy Brouard. I urge everyone to read it and reflect what actions, even tiny ones, we can take to care for our world. 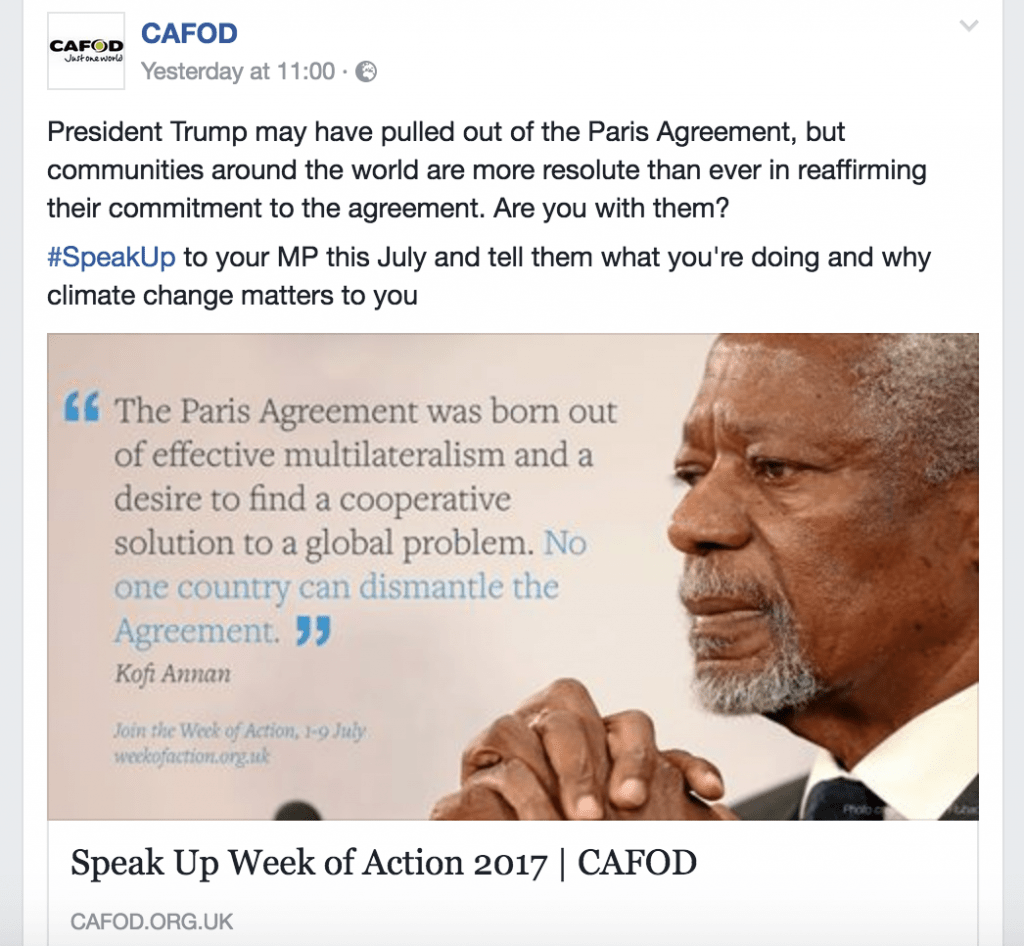 EMERGENCY APPEAL FOR HELP FOR FAMINE IN EAST AFRICA

More than 16 million people across South Sudan, Somalia, Ethiopia and Kenya are in urgent need of food, following months of drought.

In South Sudan alone, 4.9 million people – more than 40 per cent of the country’s population – urgently need food, and nutrition assistance. In many places, such as South Sudan, the crisis has been exacerbated by conflict and economic collapse. 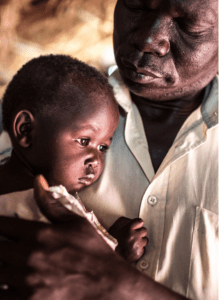 CAFOD is already working with its local Church partners on the ground, who are providing vital aid to communities affected by hunger and drought.

What is happening in South Sudan, Somalia, Ethiopia and Kenya, and how is CAFOD responding?

Millions of vulnerable families desperately need food, as famine has been declared in parts of South Sudan: the world’s newest nation is in the grip of a devastating humanitarian crisis.

In Unity State, 100,000 people face starvation and fears are growing that more vulnerable families in other parts of the country are on the brink of famine.

Without homes and safety, nearly 4.9 million people across the country urgently need food and security. As part of the Caritas network, with their sister agency Trocaire, CAFOD is already working with local Church partners on the frontline of this crisis. In Yirol in central South Sudan, they are getting food and essential items to people most in need.

The Catholic Bishops of South Sudan have called on the international community “for immediate and unconditional concrete intervention and action before thousands of innocent lives are carried away and before it is too late.”

Since December 2013, a brutal conflict has devastated the lives of millions of South Sudanese and more than 3 million people have been forced to flee their homes.

The UN estimates that the number of people in need of food aid has increased from 5 million in September 2016 to 6.2 million between February and June 2017. This means that 50 per cent of the population do not have enough food to eat and are at risk of famine; with more than 363,000 acutely malnourished children and 70,000 severely malnourished children in need of urgent life-saving support.

CAFOD’s two long-standing sister agencies have been present in Somalia since 1992 and 2011 respectively, and responded to the devastating drought and food crisis of 2011. They have strong networks of local partners who are working with the most vulnerable families in need of nutrition, health and cash transfers to buy available food.

Back-to-back seasons of poor or non-existent rainfall in 2015, exacerbated by the strongest El Niño phenomenon on record in the same year, led to the worst drought in decades in northern Ethiopia. The number of people in need of food sky-rocketed from 3 million at the beginning of 2015 to 10.2 million twelve months later in January 2016.

Failed autumn rains in 2016 have led to a new drought affecting 5.6 million people in the southern and south eastern regions of Ethiopia – which has resulted in critical shortage of water and pasture in lowland pastoralist areas leading to a sharp deterioration in condition of livestock and livestock deaths in some places. For these communities, the loss or livestock means a loss of or decrease in milk production – often one of the only sources of protein for families.

CAFOD’s programme staff and local partners continue to respond where the needs are greatest with food, nutrition, water and sanitation.

In February, the Kenyan government declared drought a national disaster, affecting more than 2 million people the north of the country.

In 2016, the long rains (March-April-May) performed poorly and the short rains (October – December) failed. The communities in the north of the country are primarily pastoralists: nomadic and semi-nomadic herders who rely entirely on their cattle and livestock as a means of maintaining a sustainable way of life and living. They depend on the two rainy seasons and when they fail, the effects can be catastrophic as they lose cattle and valuable pastures to drought.

CAFOD is working with its long standing local Caritas partners to get food, healthcare, water and sanitation delivered in the northern county of Marsabit.

They have also taken the lead in providing assessment information and analysis on the hardest hit areas and families as part of a consortium of NGOs.

Why are there droughts in East Africa so often?In general, droughts are occurring in East Africa increasingly often. The region suffered from major droughts in 2011 and in 2009. Because droughts are happening with such frequency, people have very little time to rebuild their lives and livelihoods between each event. When there are rains, they are less predictable than in the past, making it harder for farmers to plan ahead.

The 2011 drought was a result of La Niña phenomenon: lower than normal temperatures in the Pacific Ocean had serious effects on weather conditions around the world. In many areas of East Africa, the rains that usually fall from March to June were far less heavy than usual.

In 2017, the hunger crisis has been caused by severe and extreme weather shifts, part of the El Niño effect which has caused drought. In countries like South Sudan this has been exacerbated by conflict and economic collapse.

What can we do to help the hunger crisis in East Africa?

Please give what you can to the East Africa Crisis Appeal

CAFOD’s briefing paper ‘International Trade for the Common Good’  focuses on the decisions our government can make. It describes how it is possible to try and make the best of  Brexit has given us and place the UK in a fairer trading world.

Love the world we live in; love our neighbours

Imagine watching your crops shrivel under the hot sun. You worry when the rains will come. You know you need to irrigate your crops, but with limited access to electricity in your village, you can’t give them the water they need.

Switch your energy supplier!
Caring for our common home and our global neighbours starts in our own homes and in our own neighbourhoods. Each of our everyday choices, including the energy we use, shows the kind of world we want to create. 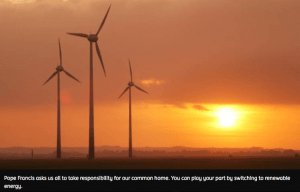 CAFOD’s  prayer for the environment

Praised Be
A prayer inspired by the papal encyclical Laudato Si’

Living God,
have mercy on us,
for the times we forget
that we belong to each other.
You call us to be still,
to hear the whisper of our Sister Wind,
to feel the radiance of our Brother Sun,
and to be nourished by our Mother Earth.
Renew us in your healing love.
Inspire us to water the earth,
and nurture one another,
so all may flourish.
Together, as one family,
may we always sing your praise.
Through Christ our Lord, Amen.