• This is very personal account of a week which has marked and moved me. Inevitably it touches on political matters – it would be impossible not to. All the views and observations expressed are my own, and not that of the parish or the Church or of any other individual or organization. Mary Kirk.

Firstly, an enormous thank you to those who donated good quality, clean and serviceable items from the Help Refugees “priority needs” list, and thanks to the parish, Father Charles, and other parishioners who also gave money. Because of the enormous amount of goods and clothes received there will be a second trip later in February to take what my little car could not. I will also be able to send £200 as we were so overwhelmed with material donations. 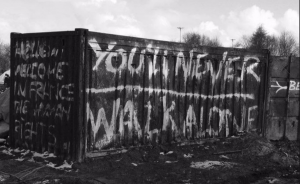 The situation in Calais for refugees is grim. Despite President Macron’s assurances during his recent visit to Calais that the French state would henceforth ensure that refugees are fed, and that the police will respect human rights, this is not happening. The day I arrived, the CRS (French riot police whose brutality I had witnessed several times when I lived in France) had done one of their “clearances ” – the systematic destruction or confiscation of refugees’ belongings, depriving them of any means of shelter against the winter weather. That day’s raid had been more violent than usual, and a teenage migrant had lost an eye when a CS gas canister hit him full in the face. It was one more skirmish in the war of attrition waged by the French authorities and police with the regular use of beatings, CS gas, and pepper spray aimed onto migrants’ clothes, sleeping bags, tents and even water supply, often in the early hours of the morning.

These gross abuses of human rights, in part funded by the British taxpayer, do not remove the migrants from Calais, but they do make their desperate lives a degrading misery. Those fleeing war and persecution will not go to the processing centres provided by the state for they fear expulsion, and they fear authority. On the day I am writing this the BBC tells of fights between groups of migrants (Afghans and Eritreans) at distribution points in Calais. Tempers and old enmities will flare more easily when people are constantly deprived of sleep, and are cold and miserable.

Another result of police action is that Help Refugees and similar organizations have to work doubly hard to replace the goods destroyed. While I was working there was a day-long distribution of some 360 tents. One afternoon we were called from our usual jobs of sorting and packaging clothes to help roll, tie, bag and pack 750 blankets.  Only two days later these had been removed or destroyed again – which means more donations are in constant demand.

Regular jobs at the Auberge des Migrants include cooking and distributing  2500 meals a day, cutting and bagging firewood, and the School Bus Project which normally goes on the road twice a week to offer educational facilities. There is also an Info Van which goes to the distribution points where people can charge their mobile phones and get wifi. 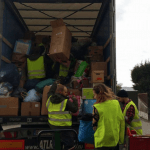 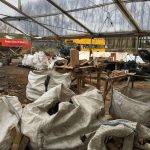 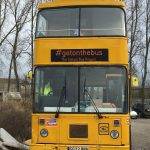 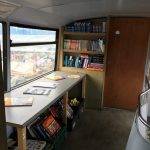 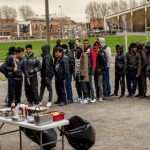 At a distribution point 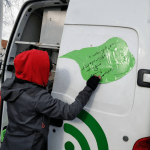 A refugee writing a message on the Info Bus

The recent brutal suppressions have meant a great deal of tension, anger and volatility among the migrant communities, and volunteers’ safety can be jeopardised. My own work in the warehouse had no dangers, other than exhaustion! 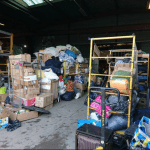 All this to be sorted… 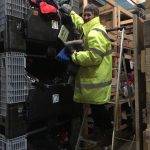 I worked on “main sort”-  sorting and re-sorting the incoming donations of clothes. It doesn’t sound difficult but the work was heavy, cold and unremitting. I felt my age after a nine-hour day in a freezing warehouse heaving boxes and bags. 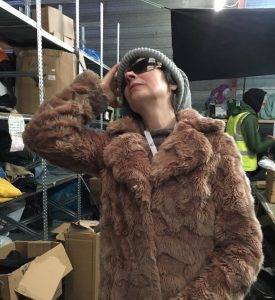 Amazing what I found among the donations I sorted…often disgusting smelly dirty items which, no doubt, were thought “good enough for migrants”. Some (see left) are inappropriate (we even got one jockstrap!), but if the wrong clothes are in good condition they can be sold in the volunteers’ charity shop. I weeded out a lot before I packed up my car. And do people really think migrants change into pyjamas and dressing gowns at night? No, they sleep in what clothes they have, shoes on their feet, ready to run when the police come with tear gas, pepper spray and dogs at 3am.

One of the few cheering things about the week I spent at the Auberge des Migrants was the youth of the volunteers. I was by far the oldest; most were in their twenties, and those in charge mostly in their thirties. Some of the permanent helpers and organizers have worked for years for no wage, merely subsistence. Millennials often get a bad press; these young people, from all over Europe and also from the States give some hope for the future.

The displaced people of the world number many million; in Calais the prospect of getting to the UK draws hundreds, sometimes thousands, of them. It is one of the great humanitarian tragedies of our time.